Does anyone else find it sad that books don't seem that important anymore?  You can buy a kindle or a nook and then purchase them for a third of what you would pay for them in the store.  You can buy them used for very cheap.  You can find "bootleg" copies to download on the internet.  You can download them as a PDF document.
Whatever happened to appreciating a book for its clever or striking cover art, that synopsis on the back or the inside cover that won you over, or the crisp yet gentle feel of paper against your fingers when you turn the page?
We don't write things down anymore, we type them.  We don't scour the library for resources as much, we try Google (via Google Scholar) first.  The good thing, however, is that if you take that information out (by download) it is still there, whereas, in a library, the book you are looking for may have already been checked out by someone else and completely useless to you.
We work, play, learn, teach, write, and publish with our computer devices. I do not think I was prepared to write with multimedia before taking this class.  I honestly never gave it much thought.  Writing and creating are important to me but I never really thought about how an approach to multimedia, but also a knowledge and appreciation of it, could help me.  The truth of the matter is that we live in a world that appreciates and looks for that which is quick and efficient, simple and easy to process.  By being able to write and publish with multimedia, writing can be viewed in real time, can be published in real time, and can be cited and read and commented on all over the world in real time.  As a future English teacher, I can see myself encouraging my students to have their own blogs, to keep up with a journal with entries they would be proud enough of to publish in their blog, to make Glogster posters of stories they are learning about, to find and embed videos related to given topics, to read how other bloggers feel about what they are also reading about.  I think my students will already have some knowledge of these things beforehand, and giving them these outlets certainly couldn't hurt. If they are already collaborating with similar things in their free time, why not engage them by allowing them, encouraging them, to use them to better understand and find interest in what I am teaching? 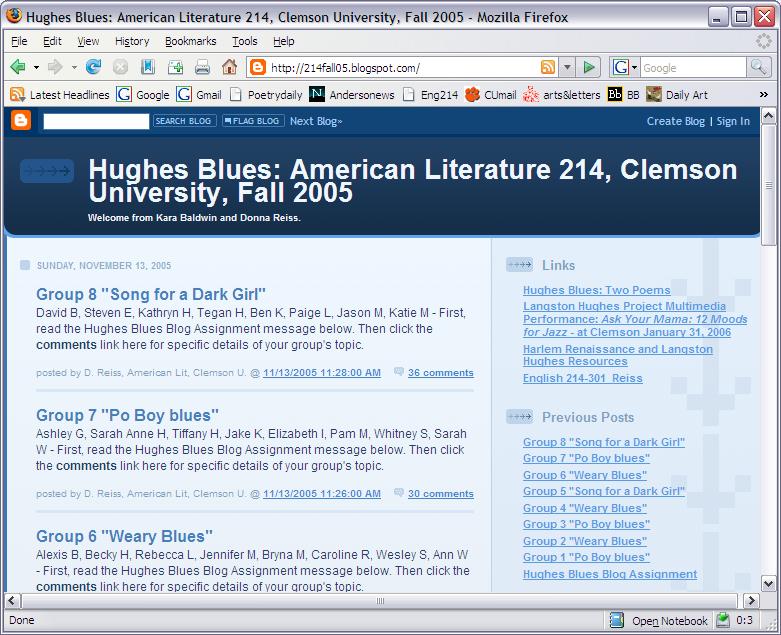 Example of a student created Glogster:

The primary messages of these two mini movies made by former students of EDM310 is something that can help alot of students taking this class.  Procrastination, stubborn-ness, resistance to changing your own way of thinking, thinking outside the box to keep from doing assignments, were all things that fictional student "Chipper" demonstrated in the "Chipper" Series.  Chipper thought that her methods worked based on past performance, but, in actuality, they had only helped her get by.  She was not willing to follow the rules and did not want to put in the effort to succeed at whatever she was doing, and it only pushed her back further in life until she finally had a change of heart.  The message of these movies seemed, to me, like they were saying that a student might as well use this class to get on the right track and learn how to manage time, follow instructions, organize, and take advantage of opportunities that are offered (if they don't already do these things) because they are all skills that will help in the future.  "Chippper" was resistant to these ideas until she realized that without them, all her attempts would keep failing because she didn't put forth the initiative.  The students in EDM310 let the confusion and endless assignments get to them before realizing that they needed to accept and embrace the concepts needed to survive this class.

In the opening of the video, many problems are presented with modern schooling. Kids are used to communicating through email, text, and instant message, which are either banned by most schools or not incorporated into the atmosphere in general.  They are not reached on a level they understand. Their world is full of creativity and access, both of which seem to be an after-thought in most classrooms.  When they are on their own, even on-the-go, they are still learning with their smart phones and iPods and iPads and laptops.  They are learning more things through these mediums than they, and most of us, probably realize.
For those of you reading this who own a smart phone, you can probably relate.
For example, how many times a day do you hear something, see it in a store, on a billboard, at work, or just in your environment, and then pull out your Droid, iPhone, or Blackberry, etc. and look it up?  How many apps do you have that involve stocks, trivia, news, world facts, or reading?....

Exactly.
Used to, kids only knew what they learned in school, read in books, heard around the community, etc.  Now they can access anything they are interested in at point of their day and no matter where they are at.  We have to be the bridge. We have to be the filters that show them how to interpret data, how to make use of it, how to separate truth from fiction, and where to look for these things.
Another thing...students are used to having access, to being connected or linked to the rest of the world.  As the experts, teachers and professionals in this video point out, sealing students off in a classroom harms more than it helps.  They need to feel like school is a community, not a place.
I also watched Learning to Change, Changing to Learn: Student Voices. This video was kind of the reverse. The students gave their opinions on technology and usage, and how they feel about the connections and resources it offers. Some enjoy it for keeping contact with others, some enjoy listening to music, texting, gaming, and also, surfing the web on their phone.  Others like collaborating and creating music and games.  One of the students in the video said that he thought technology made for better learners because it allowed for the creative process of looking at your resources and thinking about your final project and evaluating both to determine the steps of said process.
.


4. The Secret Powers of Time by Philip Zimbardo and Drive: The Surprising Truth About What Motivates Us by David Pink.

Philip Zimbardo says that there are two different perspectives on the past, two on the present, and two on the future. To me, it goes like this: you can live in the past or appreciate the good times you had, you can live in the moment, whether you are "hedonistic" or just reluctant to plan, or you can look to the future, whether you are worrying about it or working to make things better.
What does this have to do with education?
Philip Zimbardo says that we are born present-oriented and education serves as a function for taking "present-oriented little beasts" and turning them into future or past oriented individuals.
He also uses this to explain why there are so many students dropping out in our country.  Children of minority backgrounds and lower socioeconomic standing are more likely to drop out, and also, boys are too. Why boys? Because the average male, according to statistics, has spent 10,000 hours playing video games by the time he is 21.  This means that their social, emotional, and interpersonal skills become underdeveloped, and the fact that the world that they are concentrating their focus on is of their own creation leads them to lose interest in school easily.  The basics, reading, writing, and arithmetic, are not enough to keep their attention.  With little to no active interest or control in what they are learning, they are either not learning the curriculum, or refusing to.
It seems like a lot of people are driven for success, whether it is something to look back on, to live in the moment for, or to look forward to.  But, it also seems like alot of people are driven by success outside of education.  Education is, to some, just a way to get to a place where they can make a lot of money and fit into the lifestyle they want.  Success seems to be defined as having more than others, making more money, having more friends, earning more degrees.  It's less about how you feel about yourself and more about how others see you.
Posted by Carly Pugh at 5:48 PM

What I'm Currently Listening To...

Brokenness Aside by All Sons and Daughters